Applications are an integral concept in Marathon. Each application typically represents a long-running service, of which there would be many instances running on multiple hosts. An application instance is called a task. The application definition describes everything needed to start and maintain the tasks.

According to RFC 1035 DNS labels are limited to 63 characters. Mesos-DNS will append a random 9-character long string to your service name. This means that your service name length must be less than or equal to 54 characters in order to have SRV records generated correctly.

To check that your SRV records were successfully generated, you can use dig command, for example:

Let’s start with a simple example: an app that prints Hello Marathon to stdout and then sleeps for 5 sec, in an endless loop. You would use the following JSON application definition to describe the application:

Note that cmd in the above example is the command that gets executed. Its value is wrapped by the underlying Mesos executor via /bin/sh -c ${cmd}. 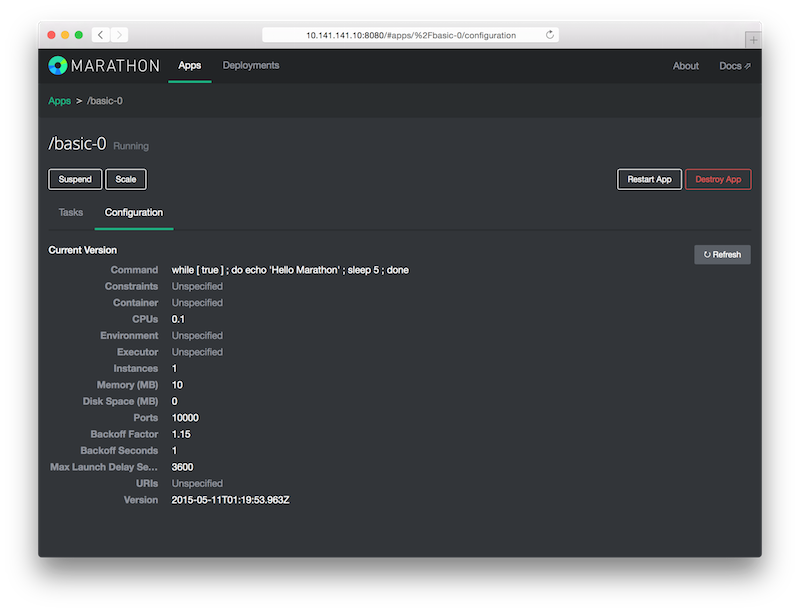 To run any non-trivial application, you typically depend on a collection of resources: files and/or archives of files. To manage resource allocation, Marathon uses the Mesos fetcher to do the legwork in terms of downloading (and potentially) extracting resources.

Before we dive into this topic, let’s have a look at an example:

What the example above does: before executing the cmd, download the resource https://example.com/app/cool-script.sh (via Mesos) and make it available in the application task’s sandbox. You can check that these have been downloaded by visiting the Mesos UI and clicking into a Mesos agent node’s sandbox where you should now find cool-script.sh.

As of Mesos v0.22 and above, the fetcher code does not make downloaded files executable by default. In the example above, we provided the field "executable": true to tell Mesos change the fetch result to executable for every user. If the "executable" field is "true", the "extract" field is ignored and has no effect.

As already mentioned above, Marathon also knows how to handle application resources that reside in archives. By default, Marathon will (via Mesos and before executing the cmd) first attempt to unpack/extract resources with the following file extensions:

To prevent this behaviour, field "extract": false must be provided.

And how this looks in practice shows you the following example: let’s assume you have an application executable in a zip file at https://example.com/app.zip. This zip file contains the script cool-script.sh and that’s what you want to execute. Here’s how:

Note that in contrast to the example basic-1 we now have a cmd that looks as follows: app/cool-script.sh. This stems from the fact that when the zip file gets downloaded and extracted, a directory app according to the file name app.zip is created where the content of the zip file is extracted into.

Additionally, if you want to use a fetcher cache, "cache": true field must be specified. If a URI is encountered for the first time (for the same user), it is first downloaded into the cache, then copied to the sandbox directory from there. If the same URI is encountered again, and a corresponding cache file is resident in the cache or still en route into the cache, then downloading is omitted and the fetcher proceeds directly to copying from the cache. Caching is working locally on every agent, so if the task is restarted on a different node, resources will be fetched again.

It’s also possible to specify path and name of the destination where the fetched resource will be stored:

Note also that you can specify many resources, not just one. So, for example, you could provide a git repository and some resources from a CDN as follows:

A typical pattern in the development and deployment cycle is to have your automated build system place the app binary in a location that’s downloadable via an URI. Marathon can download resources from a number of sources, supporting the following URI schemes:

With Marathon it is straightforward to run applications that use Docker images. See also Running Docker Containers on Marathon for further details and advanced options.

In the following example application definition, we will focus on a simple Docker app: a Python-based web server using the image python:3. Inside the container, the web server runs on port 8080 (the value of containerPort). hostPort is set to 0 so that Marathon assigns a random port on the Mesos agent, which is mapped to port 8080 inside the container.

In this example, we are going to use the HTTP API to deploy the app basic-3:

This assumes that you’ve pasted the example JSON into a file called basic-3.json and you’re using playa-mesos, a Mesos sandbox environment based on Vagrant, for testing out the deployment. When you submit the above application definition to Marathon you should see something like the following in the Marathon UI (for the tasks and configuration tabs, respectively): 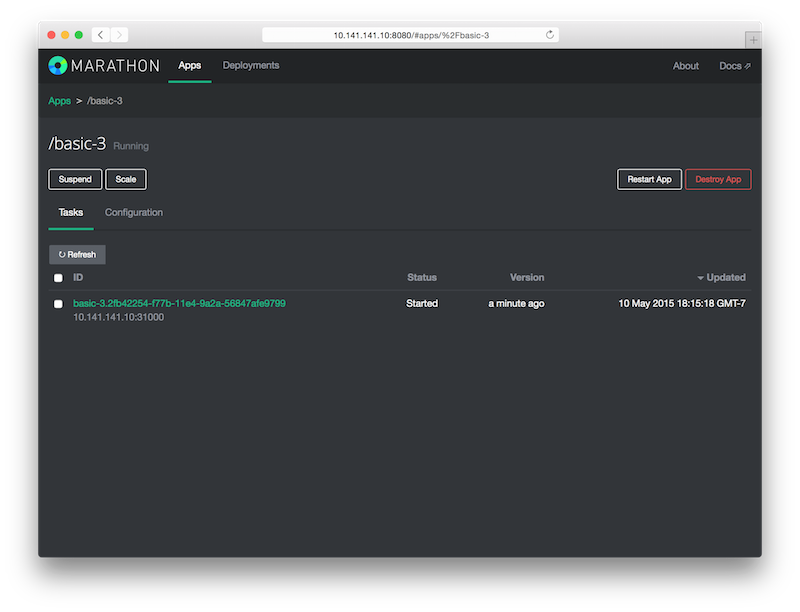 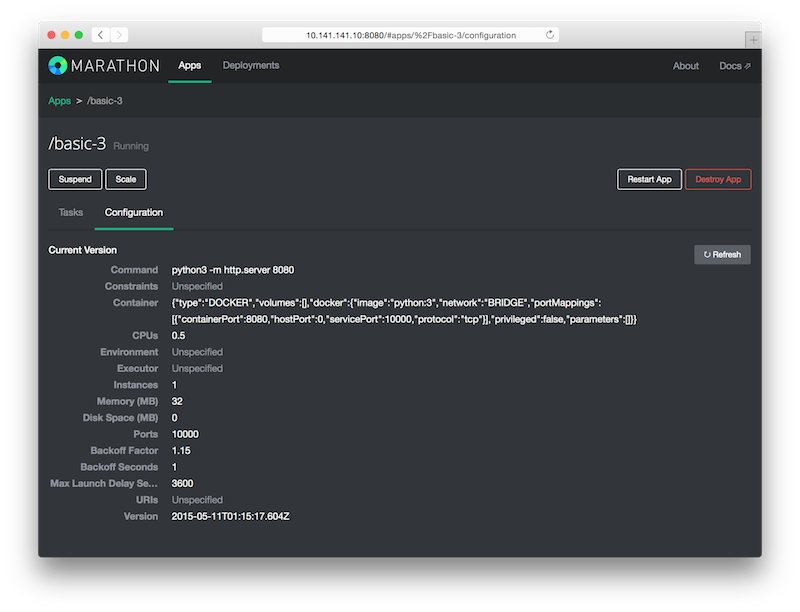 The result of this exercise is that Marathon has launched a Python-based web server in a Docker container, which is now serving the contents of the container’s root directory at http://10.141.141.10:31000.